Welcome to another new series on KaceyLaine.com [lots of ‘new series’ recently, but that’s because this is still a fairly new blog. So pretty much every series idea I have, is the start of a ‘new series’]. This one is “Splurge vs. Save”. It’s fairly self-explanatory. In a “Splurge vs. Save” post, I will be focusing on one item, or trend piece that is found in one place for fairly expensive, and a similar piece found for a fraction of the splurge cost. Often I go to stores and find a trendy piece, but I hate splurging on an item I’ll only wear a couple times before it goes out of style. Then, I go to a store like Forever 21 or H&M [aka the queens of trendy clothes] and find the same clothing item, for cheap [I was originally trying to stray away from using the word cheap, since it sounds so tacky- but it’s true- the clothes can be cheap, both in price and sometimes in quality- but hey, you get what you pay for]. Now that I took forever long to describe something that could have been explained in 2 sentences, let’s get on to Splurge vs. Save. 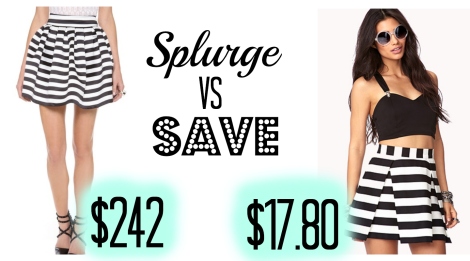 Originally I saw one of my friend’s in this Alice + Olivia skirt and was dying at how cute it was, I needed it in my closet. Then I saw the price. Yeah, not so much. But, more recently I saw a similar skirt at Forever 21 at a much more realistic price. Once I find it in my size, it will be mine. Or I may have to just order it online 😉 What are your thoughts, splurge or save?

One response to “Splurge vs. Save: Striped Skirt.”

Leave me a Reply! Cancel reply

Find us on Google+